Status of ITS resources

Kansas has nearly 3 million irrigated acres. State water law requires that water be used beneficially for the overall good of the citizens of Kansas. Approximately 85% of the water in Kansas that is diverted from groundwater and surface water supplies is used for irrigation. Although this irrigation water is utilized on only 14% of the cropland, it accounts for 33% of the state’s crop production. K-State Research and Extension is committed to developing and promoting new irrigation technologies that will be environmentally and economically efficient while conserving and protecting limited water resources. This site is devoted to general irrigation information and practices.

Lamm receives Builder Award from Kansas State Univ. Freedie Lamm is a professor and irrigation research engineer at the K-State Northwest Research-Extension Center in Colby. The Builder Award, presented by K-State Research and Extension, is given annually to individuals who have exhibited extra energy and creativity over a number of years to build new programs.

Date: Friday, August 07, 2015 - The American Society of Agricultural and Biological Engineers (ASABE) has named twelve individuals as ASABE Fellows. They were inducted at a ceremony on July 27 at the 2015 ASABE Annual International Meeting, held in New Orleans.  One of the twelve named to the class of 2015 ASABE Fellows were:

To be considered for the grade of ASABE Fellow, an individual must demonstrate unusual professional distinction, with outstanding qualifications and experience in the field of agricultural engineering. Twenty years' membership in ASABE is also required. Only about two percent of the active members of ASABE have achieved the grade of Fellow.

The American Society of Agricultural and Biological Engineers is an international scientific and educational organization dedicated to the advancement of engineering applicable to agricultural, food, and biological systems. Its members, from more than 100 countries, are consultants, managers, researchers, and others who have the training and experience to understand the interrelationships between technology and living systems. Further information on the Society can be obtained by contacting ASABE at www.asabe.org. 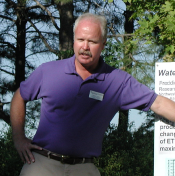 K-State Research and Extension General Irrigation website is committed to developing and promoting new irrigation technologies that will be environmentally and economically efficient while conserving and protecting limited water resources.